Welcome to the Wisdom Academies! 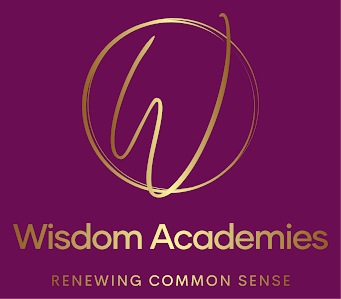 The concept for Wisdom Academies grew out of an idea related to teachings of St. Thomas Aquinas, which he inherited from Socrates, Plato, and Aristotle: that the intellectual virtue of docilitas (docility/teachability) is a necessary condition for being educated. St. Thomas maintained that the moral virtue of prudence, which, he held, is a species of common sense, causes docilitas.

Before being taught outside the home, children generally learn some docility from parents and from their individual conscience, which, according to Aquinas, is the habit of prudence acting as judge, jury, witness, and prosecution of personal choices. In learning docility, we all acquire some common sense.

Common sense is simply some understanding of first principles that are causing some organizational whole to have the unity it has that causes it to tend to behave the way it does. It is an understanding common to anyone who intellectually grasps the nature of something, the way the parts (causal principles) of a whole incline to organize to generate organizational existence, unity, and action. Strictly speaking, common sense is the habit of rightly applying first principles of understanding as measures of truth in immediate and mediated judgment, choice, and reasoning! Considered as such, it is the first measure of right reasoning!

Contemporary Enlightenment colleges and universities are essentially designed to drive out common sense from the psyche of students, convince them that the only species of understanding (common sense) is mathematical physics. In doing this, it causes students to become anarchists, unteachable, people out of touch with reality who cannot tolerate to listen or to speak to, or with, anyone who disagrees with them.

The only method that can possibly work to correct this problem is the one these Academies essentially use. This is not because these Academies are proposing them, but because they are evidently true to anyone with common sense about human education: such as Socrates, Plato, Aristotle, and Aquinas.

The truth of this claim became evident to me as a Eureka! Moment as I was reading Adler's monograph How to Speak and How to Listen. As I dove intellectually more deeply into it to discover its principles, I realized that doing so was slowly making increasingly intelligible to me precisely why, later in his life, Adler started to focus on understanding the nature of philosophy as uncommon common sense.

He did so because, for years, he had been reading St. Thomas Aquinas's Commentary on the Nicomachean Ethics of Aristotle. Doing this had enabled him to understand that Aristotle and St. Thomas had considered philosophy to be an organizational psychology that initially grows out of the moral virtue of prudence within a culture.

Prudence is a species of uncommon common sense. Before philosophy can exist in and grow out of a culture, the moral virtue of prudence (which teaches a student docility) must first dominate within that culture as a principle of cultural wonder: a cultural enterprise of habitually wondering about proximate causes of organizational existence, unity, and behavior. A culture develops this skill by training its general population to listen and speak, read and write prudentially, via the moral virtue of docility/teachability.

The first course taught in the Wisdom Academies is an orientation class (Ph 101) that focuses on the contents of my book How to Listen and How to Speak: Standing on the Shoulders of Giants to Renew Commonsense and Uncommonsense Wisdom in the Contemporary World. The reason for this is because, as I explain below, all the principles for the Wisdom Academies flow out of psychological principles contained in this book and in my earlier monograph, How to Read a Difficult Book: A Beginner's Guide to the Lost Art of Philosophical Reading.

All the introductory courses in the Wisdom Academies involve using principles first taught in Ph 101 (the orientation course) and Ph 102 (the course about how to read a difficult book) to develop within students rigorous psychological habits of active listening and speaking, reading and writing.

The orientation course inculcates in students psychological habits of actively and attentively listening in order philosophically to take notes, and speak conversationally with others to achieve understanding—how to listen in order to learn by instruction from another. Doing this imparts the moral virtue of docility, teachability/prudential learning, within a student.

Ph 102 adds more psychological principles/habits of understanding to those learned in Ph 101 by inculcating in students the general method/generic habit of how ‘actively to listen’ in order ‘actively to read’ a difficult philosophical book for philosophical understanding. It develops in a student the psychological habit of learning by becoming more than an excellent listener and speaker—becoming an excellent reader and writer.

Once these active psychological habits/skills of listening and speaking and reading and writing start to be developed, they are increased by applying them in 4 courses actively to listening to audios of, and reading, note-taking, and outlining, 7 Platonic dialogues (Ph 103, Plato’s, Ion, Euthyphro, Apology; Ph 104, Crito and Phaedo; Ph 105, Meno, and Gorgias); and in 2 courses related to: 1) Aquinas’s metaphysical teachings—Ph 106; and his metaphysical teachings for understanding his ethics as a moral psychology—Ph 107.

Decades ago, I had discovered that the best way to understand and read a difficult philosophical book for understanding is first to rewrite it in outline form.  St. Thomas does this in his commentaries on Aristotle. A student does this by first finding all the arguments in a philosophical work in their order of appearance.

After having actively having: 1) listened to, read, and understood the order of appearance of the characters, topics, definitions, and examples the characters introduce into the dialogue, in the order of appearance they introduce them, and 2) Socrates’ criticism of the way these definitions are applied by the characters to examples—Socrates’ criticisms—philosophical reading of the dialogue is finally finished. By this time a student should have mastered the dialogue, achieved an understanding of the whole dialogue by comprehending precisely how all its essential parts have caused it to be the organizational whole that it is with the kind of unity it has.

Students in the Wisdom Academies do this sort of rigorous reading of 7 Platonic dialogues; and many works related to the metaphysical and moral teachings of Aquinas.

Taking notes and, after doing this, revising them philosophically, teaches students how to outline philosophically—first generically, then specifically, and, finally, in individual detail.

Learning this outlining skill teaches students how to write philosophical articles and books.

No other school in the world teaches students with this kind of philosophical rigor. This sort of reading is analogous to the way a critic of painting by a Master identifies for a student how he or she has used color geometrically to assemble line, figured bodies, and spatial relations to compose a painting into a beautifully ordered whole.

The only way to master a difficult philosophical work or any other difficult reading material is by rewriting it according to the order of its topics and arguments. To do this, a person must first take notes!

To me and to Adler, from whom I learned these truths, all the above are a matter of uncommon common sense.

See course list for the WISDOM ACADEMIES Certificate in Uncommon Common Sense being offered by CWLAA starting in February 2022. CWLAA educational consultants may be contacted through the Aquinas School of Leadership at:

Syllabi for other courses are presently being prepared. As they start to near completion, their course descriptions will be added to this catalogue.

The Wisdom Academies consist of 2 main divisions: (1) an introductory Commonsense Wisdom Liberal Arts Academy (CWLAA) and (2) and advanced, professional Commonsense Wisdom Executive Coaching Academy (CWECA). The first is the gateway to the second. It provides students with rigorous training in understanding the nature of commonsense first principles and precisely how to apply them in individual situations. With this training in hand, our students become prepared to work with established national and international leaders to so as to be able to learn from them in more advanced ways than is possible for students of other academic backgrounds.

To make more accessible direct contact between talented students and talented educators, as far as possible to remove administrative interference between these individuals, CWLAA/CWECA courses are not designed according to the standard Enlightenment Western college and university 15-week format of semesters and weekly lectures, which include mandatory final exams, term papers, and final grades. They are designed according to an Eastern Martial Arts format of 15 Lessons, which, according to the level of advancement of the student and permission of the instructor, may be done in 15, or more or less, consecutive days or weeks. With the permission of the educational consultant, students in the same class can complete the same course asynchronously. The same class may also have rolling enrollment for the same class, or the educational consultant may continuously open one or more other section(s) throughout the year.

Once a student acquires the equivalent of 60 college or university credits (completion of 20 CWLAA courses, including required course Ph 101), the student will be eligible to apply for a Certificate of Completion in the CWLAA part of the CWLAA/CWECA program. At present, no higher level CWECA courses are being offered.

Ph 101 is the orientation course for the CWLAA/CWECA program. Taking it is not required before enrolling in other classes. It explains in detail the nature and rationale for creation of this program. For this reason, only those students who have taken this course will be granted a CWLAA Certificate of Completion, which is required to be admitted to Level 2 (and beyond): Global Leadership and Executive Coaching courses to be taught in CWECA.

Finally, the date of 15 September 2021 does not indicate the start of a new semester. It marks the formal start of the CWLAA/CWECA academies as open to the general public for enrollment in courses, for which they can pre-register. Also, this date does not indicate the first day of classes for any course; although it might be the start date for this or that course, if students have registered for a course before 15 September 2021. Educational consultants decide the start and end dates for their respective courses. These do not necessarily run consecutively with other courses in the program.